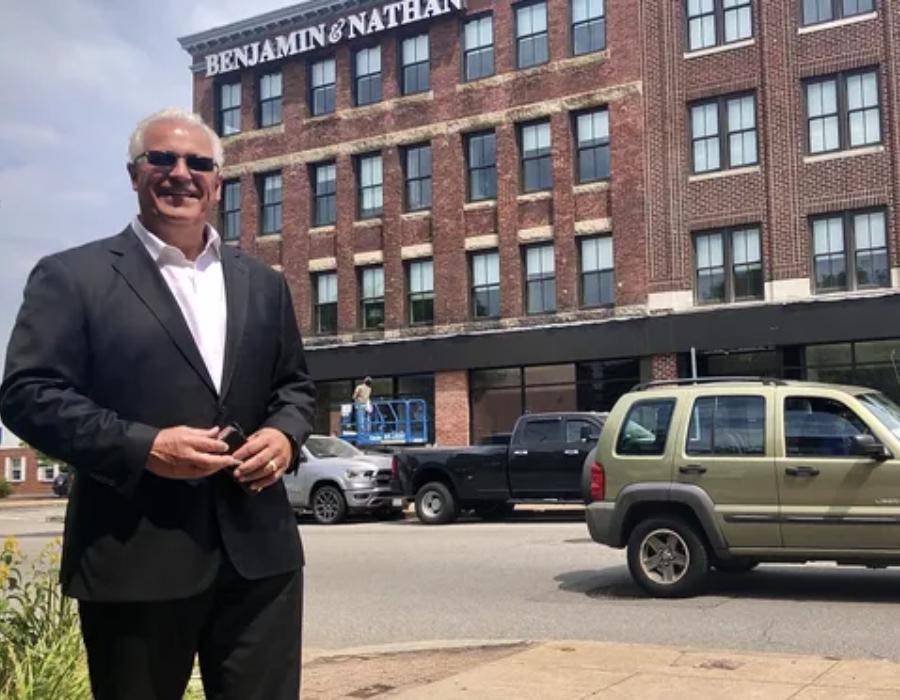 FALL RIVER — It’s no accident that the bulk of Anthony “Tony” Cordeiro’s real estate development portfolio can be found within a four-block radius.

“A cluster works to your advantage. It creates synergy,” the Fall River developer said.

Cluster is one of Cordeiro’s favorite words.

He uses it not only to describe the 13 properties he owns within a four-block-by-two-block grid stretching from Third Street to Seventh Street and bordered by Bedford and Pleasant streets.

The way the 58-year-old Fall River native sees it, the benefits of one cluster begets those of another, no matter who calls the shots.

“I want to see a marriage of commercial and residential (development) for Fall River, and then I want to see a cluster of eateries,” Cordeiro said, especially in and around downtown.

The offices of Anthony F. Cordeiro Insurance Agency and Cordeiro Properties at 171 Pleasant St., like his other properties on the outskirts of downtown, sit just east and within walking distance of Fall River’s Post Office and Government Center.

Adjacent buildings that Cordeiro owns include the contemporary-style, five-story Bristol County Savings Bank on the same short Pleasant Street block near I-195, and the professional and medical office MelCor Building at 191 Bedford St.

He also owns a parking lot, a parking garage and leases a building to a body shop business.

Cordeiro says what he’s now most proud of are two historic buildings within 500 feet of one another that he’s renovated and converted into a total of 38 loft-style apartments, including 10 that qualify under the state’s definition of affordable housing.

Cordeiro gained attention in 2010 when he and two partners paid $1.5 million at bankruptcy auction for the Mechanics Mill building at 1082 Davol St. that until 2007 had been part of Quaker Fabric Corporation.

Your stories live here.
Fuel your hometown passion and plug into the stories that define it.
Create Account
After more than $30 million in renovations, the building was reborn as Commonwealth Landing with 103 market rate, loft-style apartments on floors three through five.

The fact that there was a waiting list for the residential units, Cordeiro said, was a clear sign that there’s a growing demand in Fall River for market-rate apartments, despite the large number of subsidized and public housing units in the city.

“I predict I’ll be doing 200 more units in the next few years,” he said, including 105 market-rate apartments in a building he says he bought on Bedford Street between Seventh and Eighth streets.

“I’m teeing it up,” he said, referring to laying the groundwork to begin working at the site.

Cordeiro said market-rate apartments in the city typically appeal to a cross section of millennial-generation, working professionals and older empty nesters who want the comfort and security of a spacious apartment without the hassles associated with owning a house.

Unlike the Commonwealth Landing project, Cordeiro says he is the sole proprietor and investor in his latest apartment-building project.

A total of three buildings are involved, although at first glance the four-story conjoined structure across the street from Cordeiro’s office appears to be a single edifice.

Tenants at both addresses began moving in two months ago, he said.

A large sign just below the roof line at 162-168 Pleasant St. identifies it as the Benjamin & Nathan building. Cordeiro says he named it for two nephews.

The other apartment building is called Downtown Lofts at Trolley Square, which has its own parking lot and is located a block away at 30 Third St. across the street from the post office.

Cordeiro says all 18 Trolley Square market-rate apartments, with rents ranging from $1,275 to $1,650, are currently rented.

All of his downtown area apartment projects, Cordeiro said will go under the banner of Downtown Lofts.

“It’s our trademark,” he said.

The Benjamin & Nathan Building has 20 apartments — half of which are reserved for tenants who qualify for a MassHousing “workforce housing” program announced in 2016 by Gov. Charlie Baker.

Qualifying tenants for the Benjamin & Nathan Building must prove that their annual income level does not surpass 80 percent of the local “area median income,” or AMI.

The parking lot for tenants has been paved and will have an electronically activated security gate.

There’s an intercom security system with cameras, and access to the two entrances — one for each of the attached buildings — requires a handheld security fob.

The units come with granite counters in the kitchen and bathroom; stainless steel appliances; new large windows; restored hardwood flooring; a garbage disposal; central air conditioning; a large overhead fan in the kitchen; and a washer and dryer, the latter of which Cordeiro calls “a big draw.”

The Trolley Square building has the same amenities.

The conjoined buildings on Pleasant Street, which are now 40 percent occupied, share a fitness center, an on-site management office and public bathrooms in the common lobby.

Cordeiro said Bay Coast Behavioral, a nonprofit that provides outpatient mental health treatment, had relocated during renovation but is returning to its ground-floor location.

Raposo says he “mimicked” the original exterior of the Pleasant Street building, which was built in 1897. The building for decades during the 20th century was known as the Hub Clothiers men’s clothing store. Years later it also had a poolroom on its upper floor.

Pets are allowed, and Cordeiro says a dog park is planned for the alley that separates the north side of the Benjamin & Nathan Building from the next-door Merrill Building at 66 Troy St. named for his daughter Merrill, who works as an account executive in his insurance agency.

He has another daughter Melanie who handles marketing for both the insurance agency and development company and a younger brother Mark, who serves as chief financial officer.

Cordeiro says he has no immediate plans for the Merrill Building which still has commercial tenants.

But he says he will build apartments inside the two-story, former International Ladies’ Garment Workers building he bought at 38 Third St, located next to Downtown Lofts at Trolley Square.

The first-floor of the Trolley Square building has been occupied by a private, non-profit K-through-8 school called Mastery School of Independent Learning.

Co-founder, Mary Harding, says she feels fortunate to be a tenant: “He’s been very good to us,” she said, referring to Cordeiro.

His puts his total project-development investment for both locations at $9.3 million. Financing, he said, is being handled by BankFive of Fall River.

Cordeiro says the entire project would not have been possible without the availability of state and federal tax credit and loan programs.

The Department of Housing and Community Development program, which is intended to assist “gateway cities” such as Fall River establish market-rate housing, provided Cordeiro with $928,000 in tax credits towards the development of the Trolley Square building.

Fiola in previous years had served as executive vice president of the Fall River Office of Economic Development until a falling out with former Mayor Jasiel Correia, who is now awaiting trial on federal corruption charges.

Cordeiro says Fiola, in his role as a consultant, also helped him qualify for the Community Scale Housing Initiative, which “provides funding for small scale projects in municipalities with a population of no more than 200,000.”

“The bigger story here,” Cordeiro said, “is that without these funds we would not be able to pull the trigger.”

He says oftentimes it’s far costlier to redevelop a historic or older building than it is to embark on new construction.

Fiola, who says he’s being paid a flat fee for his services with the possibility of an additional small percentage once everything completely falls into place, said that tax credits and other incentives are essential for developers like Cordeiro.

“You have to cobble things together, and you need these incentives to make a project work,” he said.

“Commonwealth Landing really was the foundation for more market rate housing (in the city),” Fiola said. “People thought he was crazy to create 100 market rate apartments, but look what happened. There was a waiting list to get in.”

“The common denominator here,” he said, “is market rate demand, and Tony was the pioneer. He took a chance and it’s going to benefit Fall River.”

Fiola said that close to 30 percent of the city’s housing stock either is public housing or privately owned, government-subsidized housing, which he notes does help provide many senior citizens with a place to live.

But he says the time has come for market rate housing to play a greater role.

“We’re trying to offset that abundance of affordable housing with a good mixture that should result in more disposable income,” Fiola said, adding that “it’s a balancing act.” 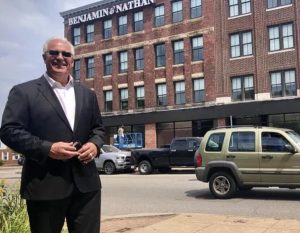 FALL RIVER — It’s no accident that the bulk of Anthony “Tony” Cordeiro’s real estate development portfolio can be found within a four-block radius. “A 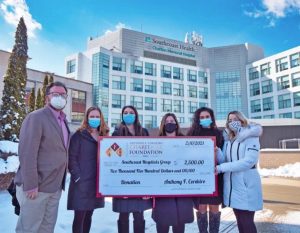 FALL RIVER — The Anthony F. Cordeiro Charitable Foundation recently announced that in its second grant cycle of 2020, grants totaling $37,850 were awarded to 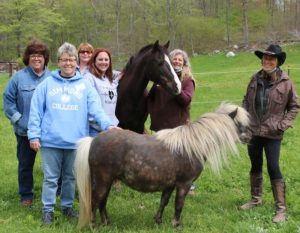 After More Than A Year Caring for Patients with COVID-19, Southcoast Nurses Find Peace and Calm Among Horses Five Southcoast nurses on the frontlines of

The Anthony F. Cordeiro Charitable Foundation was incorporated in 2017 with the goal of serving individuals in the communities in southeastern Massachusetts and Rhode Island.